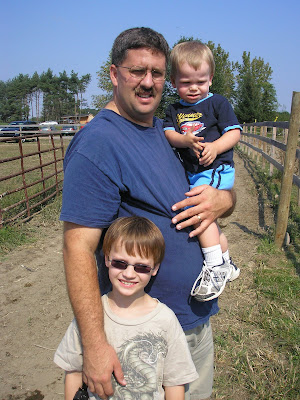 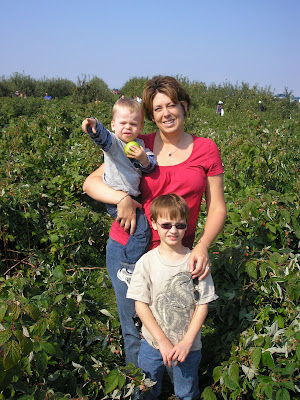 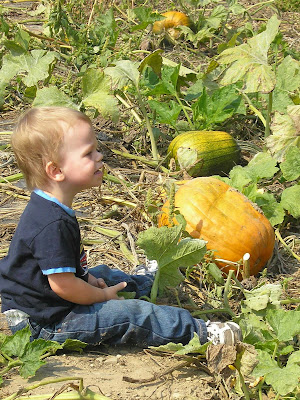 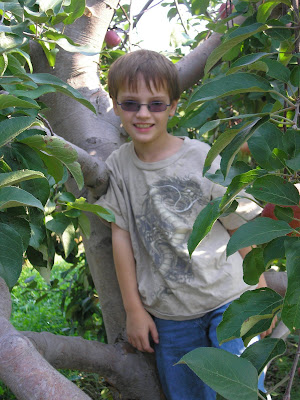 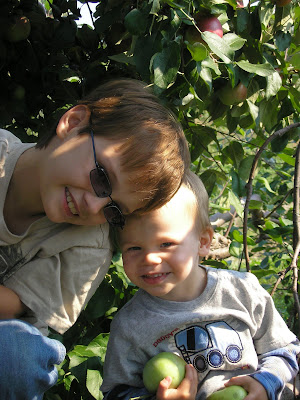 Fall is in full swing and the Baldwins are a family on the go! Zach has had his first field trip and our annual apple picking was a great success. There is nothing like watching your sons spend time together looking for the holy grail of apples. We had a ball at the apple orchard with the boys shooting apple guns, riding go carts, playing on farm equipment, and picking out the best pumpkin on the vine.

Alex has been up to his old tricks this fall. He fell on a matchbox and we took a quick trip to the hospital so he could get five stitches near his eye. He was such a trooper though we were a little traumatized from the drugging and stitching. I am sure that this is only the beginning so I'm glad that we had an easy first child so we could ease into parenthood. Alex would really have been a shock to our symptoms if he was the oldest:)

Our family enjoyed the Eastern European and Russian Culture Festival that our adoption group holds every year. We all played with friends, heard Russian stories, made cultural crafts (really, doesn't everyone want to make a dombra;) and spent time with family. It was a great day and was so nice to see so many children that share birth countries and common cultures.

Toodles and have a wonderful weekend!
Posted by Don, Michelle, Zachary, and Alexander at 9:12 PM 2 comments: 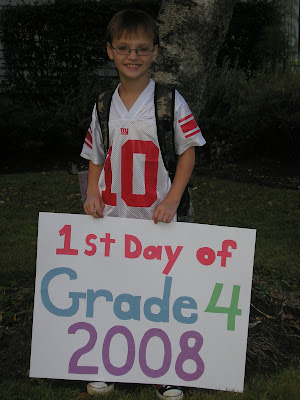 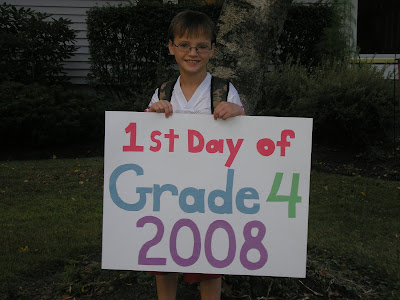 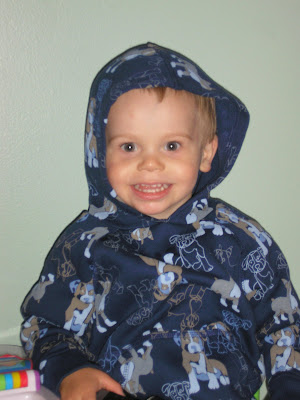 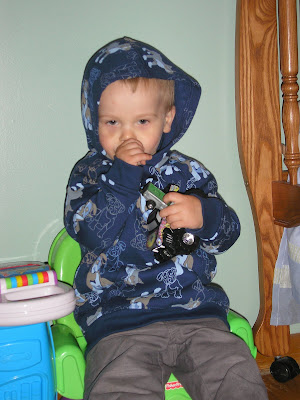 Here are the pics of Zach's first day of school. We always take a picture under the same tree and so far he has not turned "too cool" to do it:) He was wearing his new Giants jersey which has caused his father much pain and anguish. Alex was too adorable when I took these pics. He and I took a walk around the neighborhood and he was happy as a clam to walk like a big boy. Well the second picture shows how he looked before bedtime because we actually walked a 1/2 mile! It's amazing to see how much he has grown.
Posted by Don, Michelle, Zachary, and Alexander at 6:49 PM 2 comments: 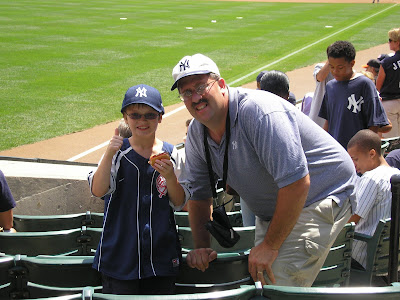 At the big game with Dad 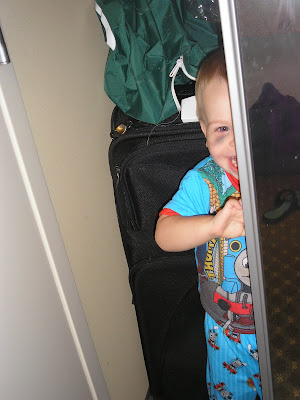 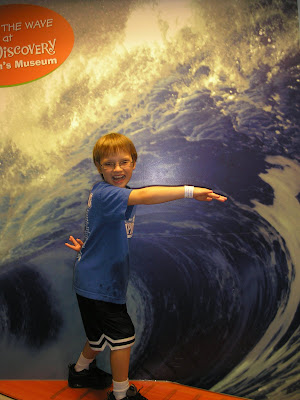 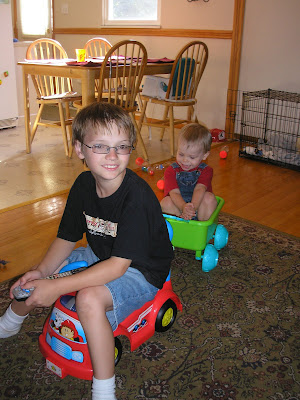 Posted by Don, Michelle, Zachary, and Alexander at 8:58 PM 1 comment:

The Last Days of Summer 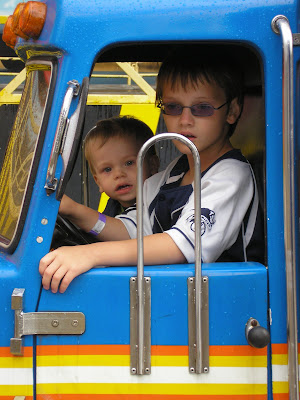 Going for a ride at The Great Escape 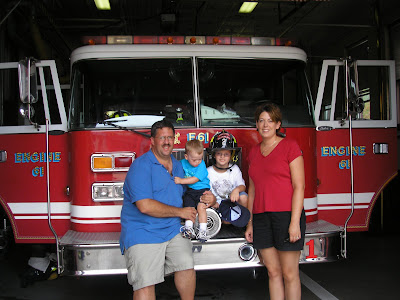 In Baltimore. How do we always find a firehouse wherever we go? 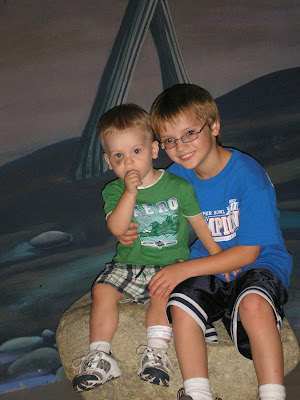 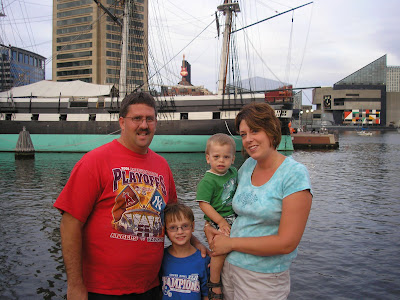 The Baldwins at Baltimore's Inner Harbor 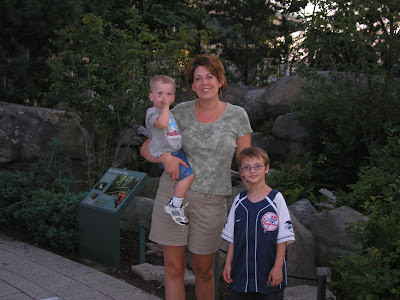 Alex enjoyed his first trip to Great Escape. Everyone had a great time, especially since Zach was finally at the right height for all of the roller coasters. He was an awesome brother though, and rode the little kid rides with Alex as well.

We spent our last week of vacation going to Baltimore, Maryland and had a wonderful time. Unfortunately Alex got his first black eye falling on a toy two days before we left so he had a big shiner for the trip. Zachary and Alex had a great time going to the science and children's museum; I think we spent five hours at one museum as it was so much fun. The aquarium was great but they have a no stroller rule so we spent our time running after Alex and were exhausted at the end of the day. Don and Zachary went to their Yankee vs Oriole game and were actually able to see another one the next night as well. It was amazing, after the Yankees left town it was like they took half of the city's population with them. We found a great Russian store and Don was very patient as I bought a bunch of items for the boys. Of course we seem to find fire houses wherever we go and Zach somehow convinced the Baltimore firefighters to let him put their gear on and sit in their truck. My little man:) Alex was in a continual state of excitement due to seeing so many boats. For Zach it was trucks, for Alex, boats all the way.

Soon is was time for Zach and I to get ready for school. He got through the first few days and described it as,"awesome." He seems to like his teacher and has some buddies in his class.

Alex returned to daycare and settled in after having the summer off without missing a beat. He has enjoyed playing with his friends and cousin Emily, and we are getting wonderful reports. Zach's first day of school pics will be posted soon. Toodles!
Posted by Don, Michelle, Zachary, and Alexander at 3:39 PM 1 comment: